Make no mistake about it. The prototype Hills Line exists because Eldon C. Stutsman, Inc., the massive agriculture supply dealer in Hills, Iowa, continues to receive product by rail. However, the secondary customer on The Hills Line also puts on a good show, at least in my modeled era.

Space constraints prevented me from modeling anywhere close to the full City Carton complex along Capitol Street. Taking lessons from my attempt to replicate the similarly-massive Chicago Bridge and Iron on the IAIS Grimes Line, I focused only on the buildings that were served by rail and contributed to the operating scheme of the layout.

On the advice of Lance Mindheim, I built the core of the receiving warehouse from PVC trim board. Having previously constructed freestanding buildings from nothing more than styrene sheet, I learned that no amount of bracing can prevent warping or distortions. The trim board provides a sturdy structure that will withstand the passage of time.

JTT Scenery Products concrete block sheets provide the necessary external detail. The material is just the right thickness to be easily cut but still have the mortar lines visible after painting.

I truly lucked out by finding a can of Rust-oleum spray paint that was a perfect match to the prototype. The sheets were taken outside, lightly coated, and allowed to dry.

The individual sheets were attached to the building core using Loctite Power Grab Express construction adhesive. The long cure time gave me ample opportunity to line up the seams and make sure the mortar lines were consistent along the building.

To replicate the gutters, I used thin styrene strips from Evergreen Scale Models left unpainted to match the prototype. This has the bonus of hiding a few sins from my less than accurate cutting attempts on the concrete block sheets.

Cutouts for Rix Products doors were then added and attached to the building per the prototype. What’s interesting is that the spur stops well in advance of the westernmost freight door, implying that it once continued further. Any evidence of such an extension has long been lost to history.

Loading dock seals were built from strips of heavy garbage bags attached to piano wire and painted. The dock bumpers are wood strips stained and glued to the individual thresholds.

The entire structure was lightly weathered with an India ink and alcohol wash. Details, such as gutters and light fixtures, were added to wrap up the construction process. Trees, weeds, and ballast will complete the scene. And that’s something to be thankful for.

My best to you and yours for this Thanksgiving holiday. 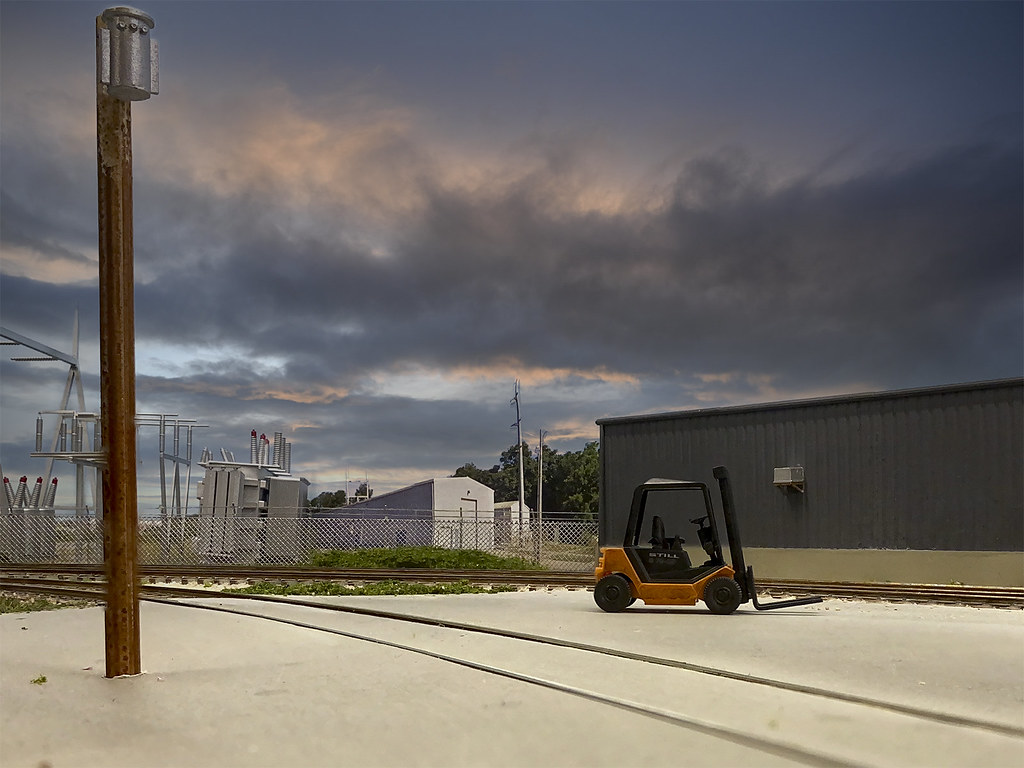